Mercedes Benz ad as bad as a dumb beer joke 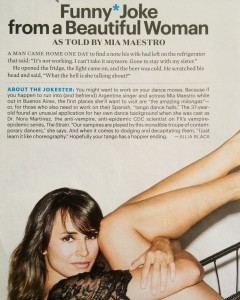 his guy comes home one day to find a note left by his wife on the fridge. It says, “It’s not working. I can’t take it anymore. I went to stay with my sister!” He opens the fridge, the light pops on, and the beer is cold and he says, “What the hell is she talking about?”

What makes this dumb is not the sophomoric ‘men are idiots’ humor. It’s the very thing that makes it un-funny. Is there anyone who reads this and does not see the punchline coming at “It’s not working.”  Have you ever been in a situation where someone is telling you a joke and halfway through (if you like them) you’re hoping you can muster up some kind of laugh at the end, because there’s not really a joke there — no surprise, no twist. You see the punchline miles before it arrives and watch it slowly plod toward you.

A few pages from this joke I turned to this ad for Mercedes Benz. 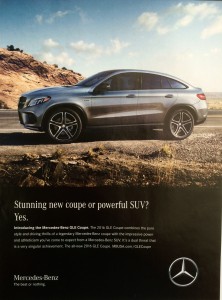 The dumbness parallel: It asks us the question “Stunning new coupe or powerful SUV?” to which we already know their answer. If I covered up the last word, I’ll bet 9 out of 10 people would correctly complete it. Why?  Because it’s not a question, but rather a statement with a question mark stuck on the end of it. Mercedes and agency Merkley are smart folks. So how did such a dumb ad get made? The answer is likely attrition. Of course it doesn’t really matter. It’s nothing more than a wasted creative opportunity. Mercedes bought a page in the Fall Fashion Issue to show off this vehicle. Mission accomplished.

But just like having to oblige the bad joke teller, no one likes to be stuck at dinner next to that person who loves to answer their own questions. It’s tiresome. Same deal here.