All I See is Fabulous Me: #3 of 3 Blind Spots That Make Really Funny Commercials

Here’s the third of three classic character blind spots you can use to make really funny commercials.

The blind spots we reveal by what we say and how we behave are rich raw material for creating funny, even poignant, commercials. A character’s blind spot both informs their behavior and makes it difficult -and sometimes impossible – for them to see what others around them can see.

Blind spots create dramatic conflict. Dramatic conflict makes great stories. And stories, regardless of how simple, are what people remember and share. For commercials, this dramatic conflict can revolve around a problem that a product or service solves, or around what separates it from its competition. 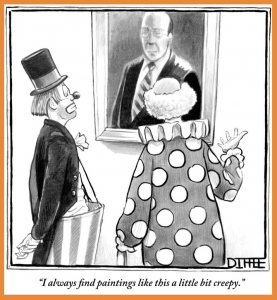 Insight #3
When you create a character who is 100% certain of the rightness of their perspective, the humor comes from their inability to see the world through any other lens but their own. And the more adamantly they assert their belief, the funnier it becomes.

This blind spot is brilliantly illustrated in the wonderful New Yorker cartoon on the right. To the  clowns, being a clown is normal. Therefore, a portrait of a corporate executive who is lacking makeup, a red ball for a nose, and a bald wig seems unnatural, ‘expressionless,’ and disturbing!  The man is so eerily…. featureless!

Ricky Gervais’s character in ‘The Office’ is a great example. David Brent is dead certain that he’s the funniest person in the room, that he’s everyone’s good friend, and that he’s an empathetic, selfless boss. His big, fat blind spot is that none of that is true.

In advertising, we can use this blind spot as a super-efficient short cut. It’s easy to quickly establish this kind of character’s belief system, and the more you push against it, more life the spot takes on. It’s a smart device to build a campaign around because, once you create the character’s behavior and establish the rules around it, you can develop fresh stories again and again.

Many of Tracy Morgan’s characters, like his Tracy Jordan on ‘30 Rock’ are built around the ‘All I Can See Is Me’ blind spot.

In the Christmas spot for Beats by R/GA Hustle (below), what makes Tracy’s character so frustratingly wonderful is that he sees his world through the obstinate ego of a child. It’s Christmas Eve and Tracy is steamrolling around his mansion on a hoverboard eating out of the fridge, making messes, opening up his presents early and tossing them around like junk. Even though he’s a husband and father, for Tracy, Christmas is for Tracy. He proclaims he’s a giver – and that he’s been ‘nice’ – but he spends the entire spot ‘taking’ and being ‘naughty’. In fact, he’s even written what he wants for Christmas on the side of his son’s face. As viewers, we’re appalled, but perhaps we’re also a tiny bit envious of his ability to act like a selfish child.

Another classic example of ‘All I Can See Is Me’ is the hero in the Martin Agency’s GEICO Cave Man campaign. The hero sees himself as a totally modern man…. but he’s a cavemen. He may be wearing a tennis sweater over his shoulders, but he’s still just a caveman wearing a sweater. No matter what he says or does, he can never escape that fact or the constant reminders from Geico. Once they created him, the team developed new spots by finding fresh ways to push against his internal conflict and refusal to accept that he’s a cavemen. Campaign bonus: As we got to know him, we empathized with his frustration, and we liked him more and more.

Give a character a point of view that they can’t get out from behind, and you have the potential for a memorable character and funny dramatic situations that can play out again and again and again. That’s a nice, simple formula for creating a legendary campaign.