Coca Cola makes stupid stuff up; expects us to swallow it.

First, let me say that I hold no agenda against soft drinks. But I do have an agenda against mindless drivel. This fall, I came across these two outdoor ads in the space of a few blocks.

How the agency thought these to be clever communications, and how Coke approved them would make for an interesting study in advertising myopia.

But getting back on point, this is a solid example of the thoughtless communications that muck up our streets and our brains. My good guess is that these were not actually meant to be read — more half-absorbed as you scurry by a bus shelter or subway entrance. The strategy being that they might seem sort of logical sound when half acknowledged.

It’s my only interpretaton of the strategic discipline at misplay here. One of the first rules I give my ad students in Killer Work is ‘make a pun, go to jail’. But these are worse. I can’t construct a syllogism where ambition = drinking soda. And in what world (besides being stranded in the desert) would a Coke be your most valuable liquid asset?!

A refreshingly honest communication might be to mash up TARP with the prevailing wisdom on childhood obesity, substituting ‘toxic asset’ for ‘liquid asset’. But now I sound like I have an agenda. Which I don’t: 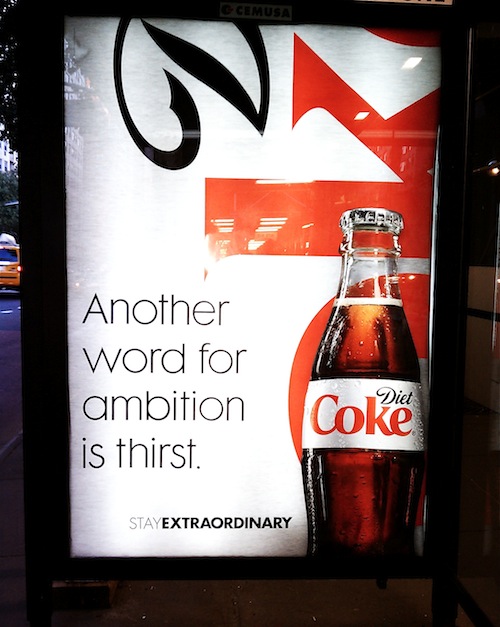 This one I shot with what looks like the negative filter effect on. Not intentional. 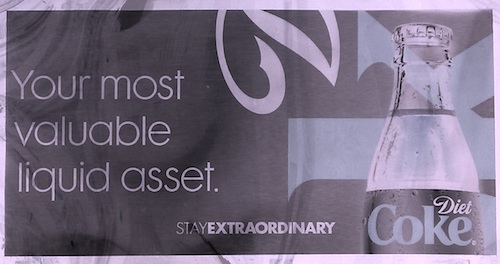