Here’s the first of 3 classic blind spots you can use to make really funny commercials.

The blind spots we reveal by what we say and how we behave are rich raw material for creating funny, even poignant commercials. A blind spot is a specific lens through which a character sees their world. It both informs their behavior and makes it difficult, and sometimes impossible, for them to see what others around them can see.

For commercials, this story can revolve around a problem that a product or service solves, or around what separates it from its competition. 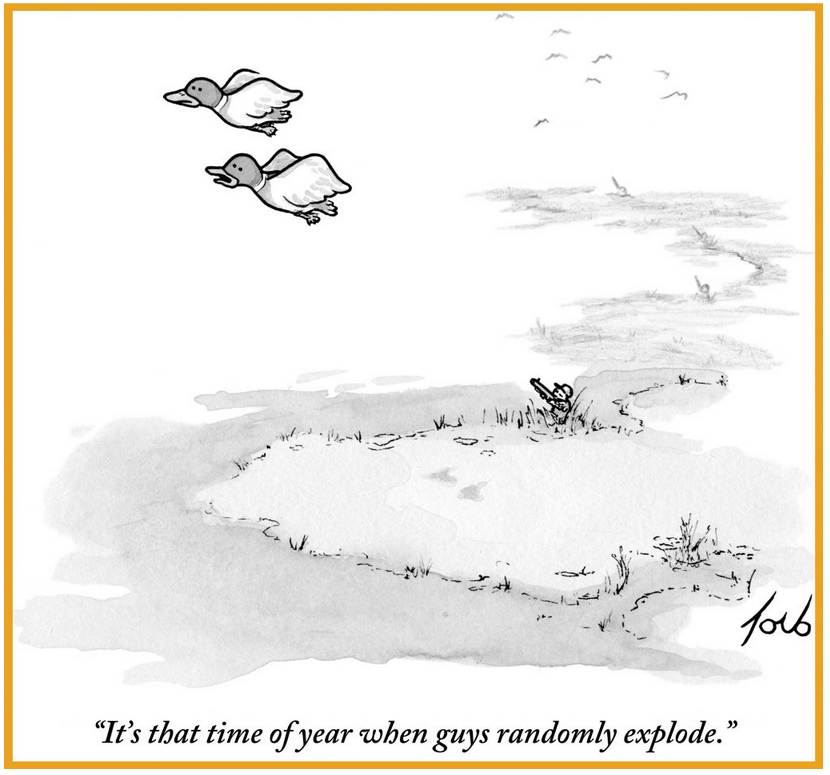 Insight #1:
We are programmed to create our own meanings and we believe in them deeply, regardless of the facts.

The confidence we have in meanings we manufacture about the world around us make for great characters who misinterpret their own actions or the actions of others —  and the more they misunderstand the better. As a result, they act in ways that appear to be irrational, pointless, or self-defeating to everyone except themselves. What creates the comedy is that we, the audience, are in on the truth — the real cause of, or true solution to, the character’s predicament.

Take the ducks in this New Yorker cartoon. They believe that spontaneous combustion is part of the natural order of things. The comedy here stems from our empathy for them. Since they accept this as truth, they’ve developed no strategies to avoid their fate.

In Deutsch’s 2011 spot for Volkswagen’s remote ignition feature, a child in a Darth Vader costume is convinced he’s harnessed the power of The Force, even in the face of failure. He tries it on the exercise bike… nothing happens. He tries it on the dog… nothing. His sister’s doll. Again nothing… but he still believes.

When he tries it on his father’s car – and his father, charmingly, turns it on using the remote, the boy is startled at first, but then reassured that the power is indeed his.

Characters who believe deeply in their own explanation of the way things work are comedy gold. If you’re working on a product, service or technology that solves a problem in a novel way, give this blind spot a try.